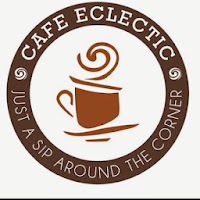 Cafe Eclectic – I’d be hard pressed to find a restaurant that took as much pride in the artisan quality of their food as their role as a community building keystone. Founded in 2008 with a location near Rhodes College, they expanded to the downtown area with a little cafe in Harbortown. In 2013, they opened their University of Memphis location.

Each of the locations serves a slightly different, eclectic menu, but the quality of freshly prepared food is wonderful. Whether you’re looking for an excellent cup of coffee and scone for a study buzz or an delicious brunch for the family, Eclectic is the place. You won’t be disappointed with what you order.

In addition to excellent coffee’s, cafe’s latte’s and such, they also do homemade sodas and Mexican Coca Cola and Fanta (made with cane sugar vice corn syrup.)

They serve black bean patties as a meat substitute, so if you’re looking for a heartier vegetarian option this is also a good spot.

Locals Choice: Diablo Wrap (above), Black Bean Wrap or the Pear and Brie Panini (Below).

Cinnamon Rolls. Yes, they MAKE cinnamon rolls. Always a go-to option regardless of the time of day. 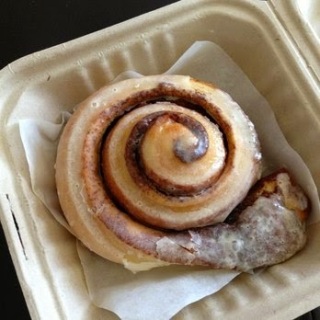 Las Delicias – a family favorite for dining on the cheap, we can get a family of 2 and a highchair fed and out the door for about $20.00.  The chips they load the table with are the day-old tortillas that they’ve sliced and fried.  The guacamole is fresh made to order.  The tamales and the grilled chicken burrito are excellent and the tortas (sandwiches) are also very popular with my friends. 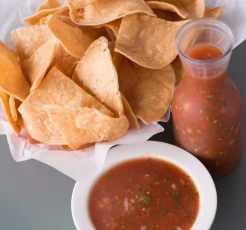 The waitstaff are super nice (especially with little ones who attempt to say Hola and Gracias) and don’t roll their eyes when you practice your Spanish with them.  For more celebratory evenings, like Thirsty Thursday, they sell excellent margaritas and beer in a glass big enough to make your mother-in-law blush.

This is absolutely top notch Memphis BBQ.  My meal is usually the cheese and sausage plate, pulled pork sandwich with slaw, and of course, banana pudding for dessert. 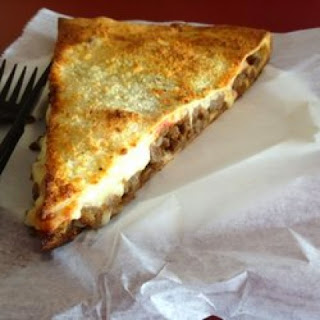 Milano’s Pizza Millington is some of my favorite pizza in the greater Memphis area. There are other places that have great pizza, but this is one of my favorites in town.
There are several branches around Memphis, but my favorite spot is the Millington location.  It’s not unusual for us to hike to Millington to run errands so we can stop at the Milano’s for lunch or dinner.
The pizza is made with whole milk mozzarella, so even the slice of cheese has the weight of a small piece of lasagna.
Milano’s makes excellent calzone’s and their meat stuffed pizza is the crown jewel of their creations. It’s knife and fork pizza.
NOV2015 Update:
I went in the other day with a friend and tried the seafood lasagna, and I discovered a whole new world.  It was amazing.  Their traditional Italian dishes are every bit as good as their pizza.  Now I have an issue of choosing pizza or lasagna whenever I’m in the Millington Milano’s
Local’s choice: Meat stuffed with red sauce on top, maybe a slice of cheese if I’m really hungry. Tiramisu is also the best kept secret in the restaurant.
Also, if you’re feeding a soccer team, office or the 3rd Marine Division they sell wagon wheel pizza’s for large crowds.

Memphis has experienced a bit of cycling renaissance in the last several years.  There are bike lanes criss-crossing the city and a sprawling rails to trails system that will eventually connect Overton Park to Shelby Farms Park and beyond.  Here’s a short list of the places that you can ride in the Memphis area.

Shelby Farms Park – Shelby Farms is literally exploding with things to do.  However, in this segment, we’ll focus on the riding.  With the Shelby Farms Greenline running through a large portion of East Memphis, Shelby Farms Park is accessible by bike to anyone who lives in Binghampton, High Point Terrace, Pidgeon Estates, Avon or any area in East Memphis between Sam Cooper and Walnut Grove.  Using bike lanes, you can get there from the University District as well.  Shelby Farms Park offers great cross country riding through the Wolf River bottoms as well as paved bike paths for cruising.  There’s also a BMX track here too.  This is a great place to go for a pretty day to ride.

Stanky Creek – Stanky Creek is in Nesbit Park in Bartlett and offers some of the most technical Cross Country mountain biking in the Memphis area.  With lots of drops, tight chutes and trees, this will be a more challenging trail day.

There are LOTS more trails than these in and around Memphis, but this will get you started, and I’d recommend checking out the Mobile App called Midsouth Greenways which has more current information on the everchanging state of the trails in Memphis.

Peddler Bike Shop has been around Memphis forever.  I can remember going in there while I was in school and watching their bike techs work in sheer awe.  These guys know biking and they know the area.  I bought my last bike from them and have been really happy with it and their support.  They’ve three locations in Memphis, so they aren’t that far away.

All About Bikes – I stumbled into All About Bikes when I was looking for a kiddy trailer to ride the Greenline with.  All About Bikes is relatively new, but they’re located between Broadway Pizza and the Belmont Grill, both of which I eat at frequently.  I had a great experience.  The owner’s name is Victor Ghosheh and he is as knowledgeable and nice as can be.  We bought the trailer and have loved it.  There’s an added benefit for All About Bikes because anytime I eat at either of those two restaurants, I stop by and browse for stuff that I NEED.

Hog and Hominy – Founded in the shadow of Clark Tower by the kind of rowdy Ole Miss frat boys that your mother warned you about, Hog and Hominy is an epicurean delight.  It merges two of the heaviest styles of cooking in the world, Southern and Italian.  The menu changes with the seasons and includes masterpieces like biscuit dough gnocchi carbonara with thick sliced bacon.  The Pizza Bianca that we had was wonderful.  Except for pizza, all dishes are served on small plates meant for sharing, so order half a dozen and pass them around.

Oh and for you Skinny-Mini’s out there, do not fear, I hear they have a wonderful mixed greens salad with a delightful vinaigrette and chicken skins- now go sit in the corner until such time as you are called upon.  We know this is not healthy, its what Elmo from Sesame Street calls a “sometime food”.  Its meant to be enjoyed.  I actually witnessed a woman order their peanut butter pie which is a homemade graham cracker crust, a layer of thick banana pudding, peanut butter mousse and fresh merengue, then proceed to complain about the calories in the dish.  The waiter was much more patient than I would have been. 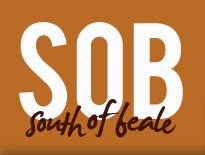 South of Beale -This is going to be short on purpose. SOB was an early pioneer in the Memphis Gastropub scene and the revitalization of South Main. EVERYONE that I’ve sent here has said it was one of the best meals they’ve ever had. The menu changes alot, and it’s one of the few places I’d let the chef pick a meal and just roll with it.

If you do nothing else in town, eat here. Forget BBQ, eat here. 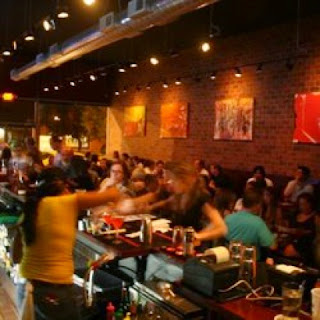 Gibson’s is Memphis for donut.  To the Memphian, Dunkin, Krispy Kreme, and all other challengers are second best.  Gibson’s is open 24/7 and in prom season you can find lots of tuxedos and sequins late into the evening as the kids come here for a donut nightcap.
Special Advisory: If you are from out of town and tasked with bringing donuts for church, work or school, this is the expectation.  All other stores will win you the social equivalent of the participation ribbon. Consider yourself warned.
Gibson’s offers an excellent variety ranging from standard glazed, chocolate and blueberry to more extravagant red velvet cake and maple bacon.  Yes, I said bacon donut. 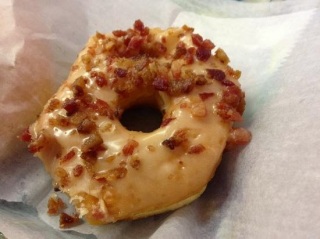 Its real bacon. Its real good.

The Green Beetle – this is the best burger in Memphis. Period. Tuesday is hamburger special day, and for $9 you can get a hamburger and fries that would feed a small 3rd world village for a week. Oh, and the homemade bun is almost a meal by itself.  This isn’t some gimmicky big burger challenge though. This is a craft burger, for people who really want to enjoy a good meal.
They run different specials every day and have menu items like a 1/2lb hot dog covered with chili & cheese and a garden’s worth of toppings.  They also have a punch card loyalty program. 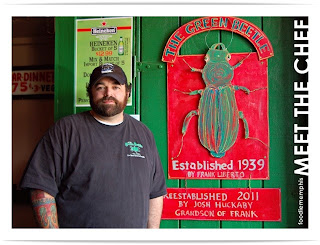 Josh Huckaby (pictured) is the owner. His grand father founded the mighty Beetle which used to be a hangout for riverboat deckhands and various other Riverati. He’s all about the hustle. He tends bar, busses tables and serves excellent food. He deserves props for the work he does. 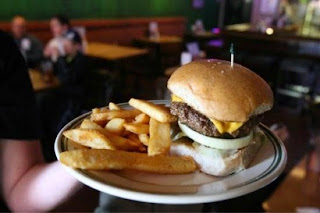 #1 One and Only BBQ – MLL’s favorite place and a Memphis best kept secret.  It has two locations, and its a relative unknown on the Memphis BBQ Scene.  Everything is good.  Its not a hit on Trip Advisor or Food Network, but when this local wants Memphis BBQ, its where I go.  I’m not a rib guy, but these are the best I’ve ever had.  My wife loves the pulled chicken.  Sweet potato fries, baked potato salad, Memphis Style Brunswick Stew, etc.  The Banana Pudding may be the best in Memphis that wasn’t made by someone’s grandmother.